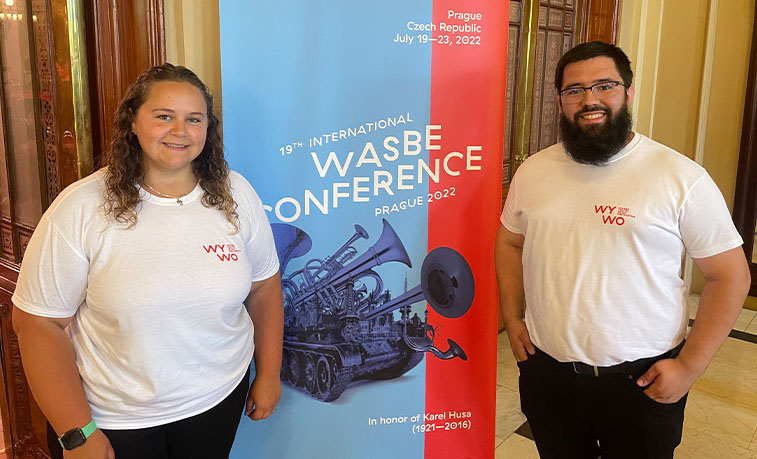 SLIPPERY ROCK, Pa. — Two Slippery Rock University musicians earned spots to perform alongside musicians from all over the world as part of a wind ensemble this summer in the Czech Republic. Victoria Lewis, a senior music education major from Warren, Ohio, and Joey Caponera, a 2021 SRU graduate with a degree in music education, performed at World Association of School Bands and Ensembles Youth Wind Orchestra, July 18-24, in Prague.

"I love to make music with different groups of people, and this was a great way to travel and meet new people and make connections across the world," Lewis said. "I've never thought about everyone using music as this common language, but everyone there was able to achieve the same goal, even though we were all from different countries."

Lewis and Caponera were among more than 70 musicians, aged 18-26, from 18 countries and four continents, who were accepted into program by WASBE. Lewis plays the clarinet and Caponera plays the tuba. As part of their placement on the WYWO, Lewis and Caponera attended the WASBE Conference, a biennial event described as "a festival of symphonic wind music, hosting the best wind bands and ensembles, conductors, musicians and music experts from around the world."

Members of the WYWO had the opportunity to work with international conductors Marek Prášil and Tim Reynish on their performance, which took place in the Žofín Palace and was open to WASBE attendees and the public.

Lewis said that while most of the orchestra members spoke English, either as a first or second language, everyone spoke the universal language of music.

"That's something I'll take back to my teaching and share with the Wind Ensemble," said Lewis, an aspiring music teacher who is a member of SRU Symphonic Wind Ensemble. "Music brings everyone together. I never thought that I would be going to Europe to play with another ensemble and explore all these different opportunities and putting myself out there. As musicians, we're just not confined to (our own places like) Pennsylvania. We can do anything we want anywhere in the world."