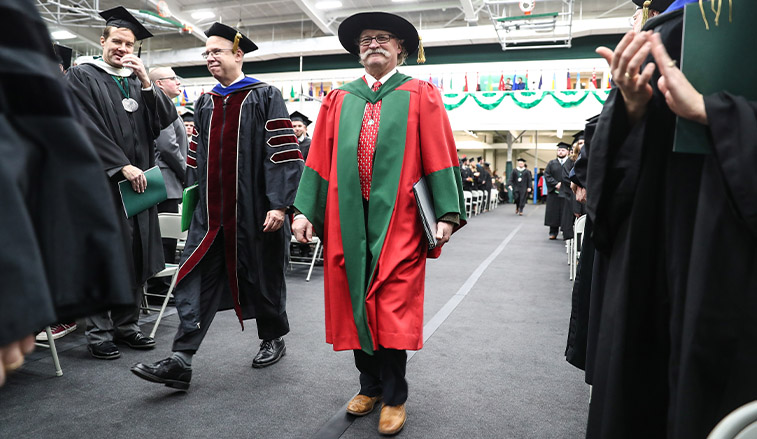 Jerry Chmielewski, a former professor, dean and interim provost at Slippery Rock University, is serving as special assistant to the provost until he retires after 30 years with SRU in January 2021.

SLIPPERY ROCK, Pa. — If you have a Jerry Chmielewski business card, there's a real chance the job title is completely out of sync with the longtime Slippery Rock University administrator's current duties. You see, during the course of the past five years, Chmielewski has served the University as a faculty member, interim dean, permanent dean, interim provost, and now, on the eve of capping a 30-year career at SRU, his final title: special assistant to the provost. Chmielewski has announced his retirement from the University in January 2021.

Chmielewski accepted his new role in June when Abbey Zink was hired as SRU's provost and vice president for academic affairs, a position that Chmielewski had on an interim basis the prior 12 months.

In his new role, Chmielewski will serve as special assistant to the provost by preparing for SRU's impending reaffirmation of accreditation from Middle States Commission on Higher Education - a two-and-a-half-year process that began in the fall 2018 - as well as ongoing academic program development, consulting Zink in her new role and continuing to offer guidance on the University's response to the COVID-19 pandemic.

"Jerry has been instrumental in helping shape the academic picture of the University for quite some time," Zink said. "He's worked closely with the deans, department chairs and everyone across campus and is well respected. His leadership during the pandemic has been instrumental in the continued successes of the institution and I'm enjoying our time working together as I get my feet under me at SRU."

"I appreciate the variety of work that I'll be doing (in this new role)," Chmielewski said. "At each level within the University, there's a lot to learn and understand in terms of how the institution functions. It's not just about offering classes."

Chmielewski joined SRU in 1990 as an assistant professor, teaching plant biology, environmental biology and biostatistics. He went on to serve as the acting associate dean of the former College of Arts and Sciences and was chairperson of the Department of Biology for nearly two decades, before becoming dean of the College of Health, Engineering and Science.

"When I think of my career, I don't look at what I accomplished because I think about what our students accomplished," Chmielewski said. "That's really how we measure ourselves as an institution, on the successes of our students and our graduates. It's always nice to see how far other people have come."

When Chmielewski became interim provost and vice president for academic affairs in June 2019, he was succeeded by Michael Zieg, professor of geography, geology and environment, who became the interim dean of CHES. Zieg will continue in his role as interim dean for the 2020-21 academic year.