SLIPPERY ROCK, Pa. - As an American traveling to China to teach English in 2000, Sam Heikinen figured he'd be there for 10 months and then return home to Michigan where he had just graduated from college. He stayed for five years. He met his wife there. He also developed a career passion that led to his recent appointment as associate provost for global engagement at Slippery Rock University.

"I don't think I knew the term 'global engagement' at that time, but in China I really set the trajectory for the rest of my career," said Heikinen, who after graduating from Oakland University became a professor at Changchun Institute of Technology. "I had these amazing experiences that amplified my life; it took the things that I didn't know were in me and helped me develop as a person."

Benefiting from a firsthand international experience is not the only reason Heikinen was hired at SRU. Since returning from China in 2005, he's led international admissions and global engagement offices at Saginaw (Michigan) Valley State University and Snow College (Utah), respectively. The last four years he was the director of international student programs at Saint Francis University in Loretto, and he lived in nearby Hollidaysburg with his wife, Yang Liu, and their two children, Sammi, 10, and Waylon, 6. 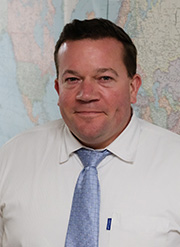 Having traveled to more than 30 countries during his career, Heikinen brings to SRU the experience of having developed several partnerships with universities abroad.

"We're excited that Sam has joined us because he has a background of success in international student recruiting and internationalizing universities," said Philip Way, SRU provost and vice president for academic and student affairs. "While we are recruiting students from all around the world, we have a special focus on creating partnerships with universities in Asia, and Sam will help in the development and management of those relationships."

The Office for Global Engagement serves many functions at SRU, including exchanges and partnerships; recruitment and services for international students; study-abroad and faculty-led programs; and the University's language center for English as a second language programs.

Heikinen earned his master's degree in educational leadership from Saginaw Valley State in 2011 and his doctorate degree in higher education leadership last month from Capella University. He was attracted to SRU because of its reputation and commitment to internationalization, and the associate provost role combined areas of all his previous leadership experience.

Heikinen's goals for global engagement at SRU focus on three keys areas:
• Enhance international enrollment and diversity.
• Foster a greater sense of comprehensive internationalization to the SRU experience.
• Continue to expand and support the study-abroad and faculty-led experiences.

Heikinen said the goals will be accomplished in a variety of ways, whether through meaningful co-curricular activities or in exchange programs where SRU and partner institutions contribute to each other's curricula, like an SRU student learning Chinese medicine.

"That's something I get excited about," said Heikinen, who wants people to think of SRU as being "all global." "It's the sense that people are engaging with each other in meaningful ways and we are learning more about the world. That is imperative right now with the globalization of markets and the skills students need."