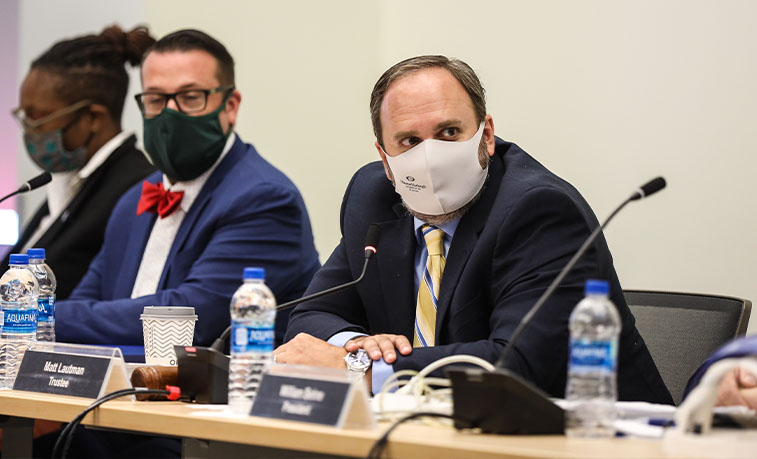 The trustees approved a 2021-22 budget with total expenditures of $144 million and a projected surplus of $776,348. The previous year's approved budget projected a deficit and this anticipated surplus could be used for unplanned COVID-related expenses.

SRU's Performing Arts Complex, which recently underwent a $33 million expansion and renovation project, was officially named by the council, which is the sole authorizing body for the naming of facilities and grounds on the SRU campus. The complex consists of three buildings: Stoner East, Stoner West and the Performing Arts Center, the latter of which houses Miller Theater.

"Language changes and auditorium is from an earlier epoch, sort of like how the word dormitory has been replaced by residence hall," said Dan Bauer, dean of the College of Liberal Arts. "We understand that this space is more dynamic than what an auditorium would suggest and it's important to use these (modern) names, especially for recruiting students to our programs. This resolution is a great, positive step that is part of many more positive steps to come as we move into and use these wonderful facilities."

Miller Theater now has a performance space that includes a 2,600-square-foot-stage, seating for 753 and a 242-square-foot orchestra pit. The Performing Arts Complex features two dance studios, an orchestra pit, a black box theater, faculty offices, upgraded classrooms, various dressing and storage rooms and a scene shop, which occupies a two-story addition to the building near the corner of Morrow Way and South Main Street.

Also at the meeting, the council received a presentation from John Rindy, assistant vice president of career and academic progress, about the Center for Career and Academic Progress, as well as the President's Report, reports from its standing committees and the trustees heard a review of finance and divisional reports.

The next quarterly business meeting is scheduled from Sept. 23-24 at the Smith Student Center.

More information about the trustees is available on the SRU website, as well as a link to the Sept. 24 meeting materials and agenda.