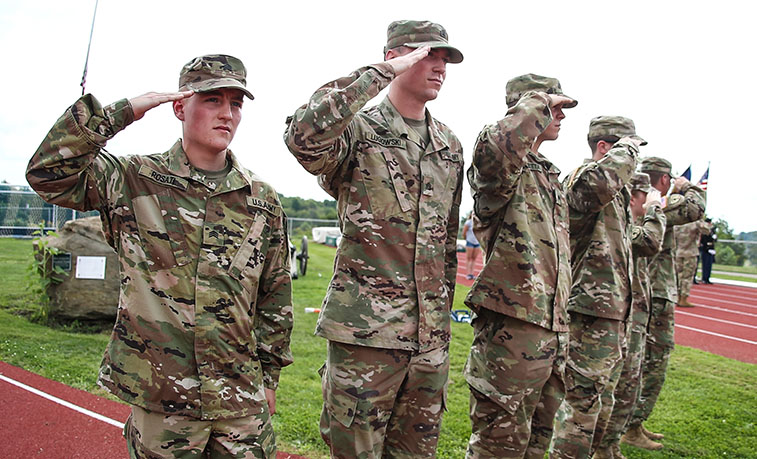 PNGAS selected SRU as one of the 30 inaugural winners of its "Guard Friendly School" designation and will recognize the University as part of its conference Nov. 8 in Lancaster. Awardees were selected from more than 480 schools that receive Pennsylvania Education Assistance Program funds.

"This is yet another affirmation of how well SRU supports our veteran and military students, and for this award, specifically members of the Pennsylvania Army National Guard," said George McDowell, SRU's veterans recruitment and benefits coordinator. "We're here to help veterans transition to and from military service and earn an education."

McDowell will accept the PNGAS Guard Friendly School award on SRU's behalf. The PNGAS is the only organization dedicated to supporting the Pennsylvania National Guard and their families, which includes 19,438 active members and more than 67,000 veterans. The PNG must recruit more than 2,300 new members each year to replace guard members who have either completed their commitments or retired. The PNGAS mission supports efforts to recruit, train and retain PNG members.

To earn Guard Friendly School status, SRU had to meet PNGAS criteria that included: class attendance policies to excuse National Guard members when they attend training or are deployed; applying class credit for military training experience; training for faculty and staff to better serve veteran and military students; and accepting funds from the EAP, which provides PNG members tuition benefits from the state that are equivalent to the yearly tuition rate set by Pennsylvania's State System of Higher Education.

Other supporting evidence for the recognition include SRU having a President's Commission for Veteran and Military Affairs, which advocates on behalf of student veterans and service members at the University, as well as a designated Veteran's Center, which is located in the Smith Student Center, as a place for student veterans, military affiliated students and ROTC cadets to relax, share information and experiences. SRU also hosts Veterans Day events and Military Appreciation Week programming each year.

In addition to Guard Friendly School status, SRU was also named a Military Friendly School by VIQTORY in January. It was the 10th straight the University earned that honor.