The chemistry department offers a vibrant undergraduate research experience. Our low faculty-to-student ratio allows for a strong mentoring relationship to develop between our faculty and students. Our undergraduate researchers have been published in leading peer-review journals such as Organic Letters and Inorganic Chemistry. Students also have the opportunity to present their work at national, regional, and local conferences and symposia. Recent conferences attended by students include the National Meetings of the American Chemical Society held in San Francisco, Philadelphia, and Boston.

Faculty research mentors and their research interests are detailed below. 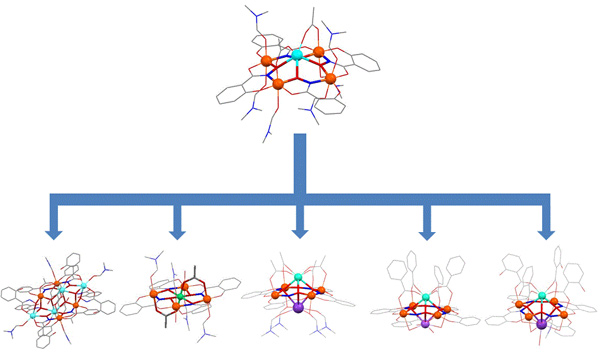 Since the first report of a single-molecule magnet (SMM) in 1993, there has been a great interest in developing these new materials. Single-molecule magnets are discrete molecules that show slow-magnetic relaxation below a critical blocking temperature due to a thermal barrier to spin alignment. For SMMs, the observed magnetic response is due to individual molecules. This opens to the door to potentially using SMMs as magnetic storage units, where individual molecules store individual pieces of data rather than the current need of larger, relatively speaking, transistors or bulk magnets. Single-molecule magnets have also been proposed to be useful as quantum computers, magnetic refrigerants, and an avenue to study physics occurring at the interface of the classical and quantum realms.

A great deal of research has been dedicated to improving SMM behaviors. Our research will attempt to utilize large, discrete metallamacrocycles known as metallacrowns (MC). These metallamacrocycles can be thought of as inorganic analogs of crown ethers, organic compounds that bind metal ions in the central cavity. In 1990/91, Pecoraro and co-workers described MCs as a macrocycle where the bond connectivity of the ring consists solely, or dominantly, of metal ions and heteroatoms (such as N or O atoms). Using certain organic compounds, known as ligands, and various metal ions, one can produce a wide variety of MCs with predictable geometries in quantitative yields. Our goal is to design and develop new MCs and to study their magnetic properties.

Forensic chemistry is the application of chemistry to the study of crime and its traces. These are elementary and valuable pieces of information that need to be detected, visualized and comprehended so that forensic chemists can make reasonable inferences which will help in a police investigation, the judiciary and ultimately providing intelligence and a better understanding about criminal phenomena.

My research is focused in developing analytical methods that can help forensic experts obtaining the needed information from traces in a faster, more practical/automatic and informative way. I have experience with Raman, Infrared and UV-vis spectroscopies, chemical imaging and multivariate data analysis (a.k.a. data mining or chemometrics) for solving several issues in questioned document examinations (ink and paper discrimination, dating of inks, determining the order of ink crossings, indented writing) as well as the identification of new synthetic drugs and gunshot residues (GSR).

Students motivated to do research in forensic chemistry will develop further their skills and knowledge in analytical chemistry and instrumentation, as well as problem-solving skills, by thinking outside the box when tackling real forensic problems.

Viruses are unique particles. They are extremely small, often made up of nothing but more than a nucleic acid molecule within a protein shell; they are ultimate, intracellular parasites, must depend on a living host for reproduction.

Nucleosides are naturally occurring biological molecules, which are fundamental building blocks of DNA and RNA. They also participate as essential intermediates in virtually all aspects of cellular metabolism. Because of their pervasiveness, nucleoside analogues produce a variety of biological effects including antiviral, anti-cancer and anti-parasites activities.

In our laboratories we have been focusing on using synthetic organic chemistry to pursuit carbocyclic nucleosides as antiviral drug candidates. One mechanism is targeting on methylation of the capped structure of viral m-RNA. A relevant enzyme in modulating the process is AdoHcy hydrolase, which is a cellular enzyme that is also employed for viral protein translation and has been studied as a potential target responsible for the inhibition of this capping process. The other potential mechanism could related to RNA depended DNA or RNA polymerase inhibition. The rational drug design and SAR (Structure Activity Relationship) study could help for enlightening the drug action mechanism and provide the guidance for future drug design.

Because the research of this lab is at the interface of organic chemistry and chemical biology, it provides a variety of different research experiences. Students interested in organic chemistry can focus on the synthesis of unnatural amino acids while students interested in chemical biology can gain experience synthesizing peptides. Additionally, students can have the opportunity to analyze complex NMR spectra and can use these spectra to build 3D models of peptides. 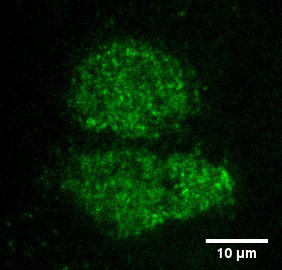 Over one hundred years have passed since Dr. Alzheimer first described the neurodegenerative disorder characterized by dementia, cognitive impairment, and progressive memory loss. Although more than five million Americans are living with Alzheimer's disease (AD), there is still no known cause or cure. Hallmarks of the disease include the development of extracellular senile plaques of the amyloid beta peptide (Aβ), and intracellular neurofibrillary tangles. While the mechanism of action is still not fully understood, the effects of plaque and tangle formation have been shown to lead to severe neuron loss, brain atrophy, increased levels of reactive oxygen species, altered calcium signaling, and changes in gene and protein expression.

Our multidisciplinary research will utilize a variety of analytical and biochemical techniques to contribute to the understanding of the mechanism of Alzheimer's disease, and identify potential targets for treatment. We are interested in using fluorescence microscopy in combination with cell culture, immunohistochemistry, genetic manipulation, and spectroscopy instrumentation to study protein structure and expression. Our goal is to evaluate changes in protein expression upon exposure to Aβ or current therapeutics to understand the progression of AD and other neurological diseases.

Tribology is the science and technology of two interacting surfaces in relative motion, such as friction, wear, adhesion, and lubrication. The significance of tribology has been recognized recently because of economic reasons and has emerged as an independent area of science and technology. The continuing desire to miniaturize devices demands a complete understanding of tribological properties of surfaces of moving components on an atomic or molecular level and moves conventional tribology to an ultra-small scale, referred to as nano-tribology. A few examples of its application are magnetic storage devices such as computer hard disk drives (HDD), microelectromechanical systems (MEMS), and chemical mechanical planarization (CMP) processes in semiconductor fabrication.

An atomic force microscope (AFM) is an indispensable tool to explore atomic scale friction, wear, and lubrication of surfaces, because it models a tribological contact by using a probe tip as a model of a single microasperity. AFM also produces images (images of topography, friction force, magnetic force, chemical force, etc...) of a sample surface by scanning an unmodified or modified sharp tip mounted on a flexible cantilever with a spring constant typically between 0.1 and 100 N/m over the sample surface at fixed or variable loads.

A self-assembled monolayer (SAM) is a two-dimensional molecular array that is spontaneously organized by adsorption of amphiphilic organic molecules on a solid inorganic surface. The interfacial properties of SAMs such as friction and adhesion are decisive criteria for good lubricants which are significantly dependent upon their molecular structure, chain length, packing order, packing density, chemical composition, and molecular termination. Professor Lim's research is focused on the frictional properties of organic self-assembled monolayers formed on the surfaces of metal or metal oxides. 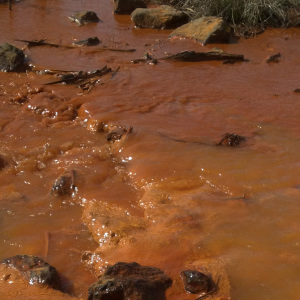 Dr. Stapleton studies Acid Mine Drainage (AMD) impacts from coal mining in local Watersheds. The project areas are within 20 miles of campus and focus on AMD treatment system operation, long-term stream monitoring, and the integration of chemical and biological indicators for water quality. The research collaborates with Dr. DeNicola in the SRU Department of Biology and has involved students with majors in Biology, Environmental Chemistry, Environmental Science, and Geology.

Professor Zapien and his students are researching the electron transfer properties of ferritin. Ferritin, a protein participant in iron homeostasis, sequesters excess iron in cells and stores the iron. Ferritin also supplies iron when needed, such as in the synthesis of iron-containing proteins such as hemoglobin and myoglobin. While an oxidation reaction is involved in iron uptake, reduction of ferritin precedes iron release.

We are focusing our research on ferritin's oxidation and reduction in the interest of learning more about the details of the protein's functions of iron uptake and release. We are employing electrochemical methods such as voltammetry, potential step chronoamperometry, and coulometry to artificially induce electron transfer of the protein outside the biological cell. We rely on either adsorption or chemical bonding to immobilize ferritin on the electrode surface. Immobilization of the protein has permitted the investigation of electrochemically induced iron uptake and release, and the characterization of the effect of protein-electrode distance on electron transfer by ferritin.

Students are learning recombinant DNA methods to produce mutants of ferritin in order to investigate ferritin's structure-function relationship. Genes for either the H-chain subunit or L-chain subunit are spliced into plasmid DNA, and then the recombinant ferritins are expressed in E. coli, purified, and analyzed by electrochemical methods.