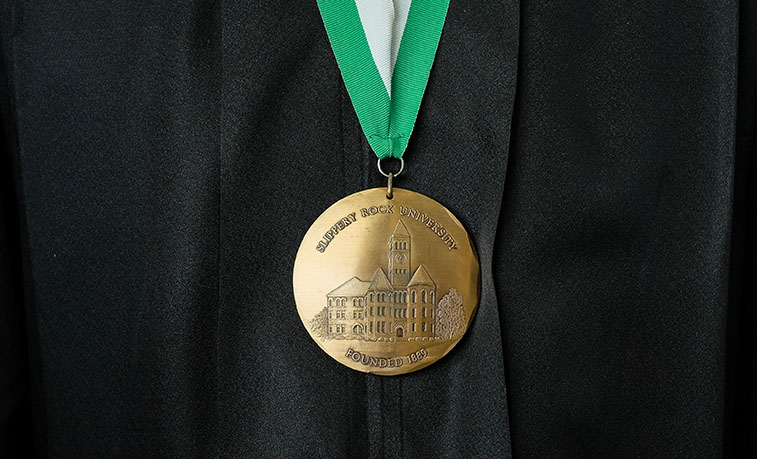 SLIPPERY ROCK, Pa. — Slippery Rock University will continue it monthlong Celebration of Excellence with an April 18 "Celebration of Achievement," an award ceremony recognizing student involvement and achievement in academics, extracurricular activities and community engagement at 5 p.m. in the Smith Student Center Ballroom.

Awards to be presented include:

Outstanding Students for Research/Scholarship/Creative Achievement and Leadership Award: This award recognizes a student from each of SRU's four colleges - College of Business, College of Education, College of Health, Environment and Science and College of Liberal Arts - based on their involvement in a variety of research, scholarly and creative projects as well as academic leadership activities. Winners include Annette Choi, a senior biology major from Chuncheon, South Korea; MacKenzie King, a senior dual major in sport management and interdisciplinary programs from New Castle; Dallas Kline, a senior sport management major from Butler; and Sarah Hess, a senior double major in psychology and criminology from Erie.

Outstanding Leadership Award: This award recognizes a student from each of SRU's four colleges - College of Business, College of Education, College of Health, Environment and Science and College of Liberal Arts - based on their outstanding leadership within an academic department or college. Winners include: Lauren Vidmar, a senior early childhood and special education major from Canonsburg; Josiah Cole, a senior biology major from Slippery Rock; Tyler Vanchure, a senior safety management major from Du Bois; and Austin Mora, a senior criminology major from Douglassville.

Service Leader Award (Global and Local): These awards are presented to students that demonstrate social responsibility, commitment to addressing social issues and the capacity and commitment to work collectively and collaboratively with others to address common priorities. This year's Global winner is Nikol Damato, a senior dual major in biology and history from Ellwood City. Jessica Farman, a junior psychology major from Knoxville, has been named the Local winner.

Global Engagement Award (Global and Domestic): These awards are presented to students that exemplify the desire to grow from a truly global education through committed involvement in the opportunities provided by SRU for global learning, global experiences and meaningful engagement with people from other countries and cultures. Michela Mennella, a senior modern languages and cultures major from Genoa, Italy, has been named the Global awardee. Olivia Kass, a senior social work major from Attleboro, Massachusetts, has received the Domestic honor.

First Year Leader Scholar Program Board of Governors Scholarship recipients: This award will be presented to three students who have successfully graduated from the FLSP with consideration given to their involvement as a leader in a student club or organization. Eric Lehman, a sophomore early childhood and special education major from Bridgeville; Clare Clark, a senior environmental geoscience major from Brookville; and Damato have been named this year's winners.

John Yannotty, a senior mathematics major from Butler will be recognized as SRU nominee for the Ali-Zaidi Award that is presented by State System board of governors. The award is given to a graduating senior who exemplifies academic excellence and involvement. Yannotty has served as the vice president and president of Kappa Mu Epsilon, the mathematics honorary fraternity, and as an orientation ambassador for the mathematics department, working to encourage prospective students to choose SRU. He has completed the FLSP and served as a peer leader for the First Year Studies seminar. He facilitated math workshops for local gifted elementary and middle school students and served as a camp counselor and supervisor at Camp Alameda, an activity-based day camp in Butler.

Yannotty has also presented internationally, including at the Joint Mathematics Meeting, one of the most prestigious math conferences in the U.S. It is hosted by the American Mathematical Society.

He has contributed to research through his internship as a statistician for the National Institutes of Health in Maryland via its Environmental and Autoimmunity Group. While there he completed two significant projects designed to identify risk factors associated with autoimmune diseases. His findings will inform ongoing research at NIH.

After graduation, Yannotty plans to pursue a doctoral degree in statistics.

The event is free and open to the public.