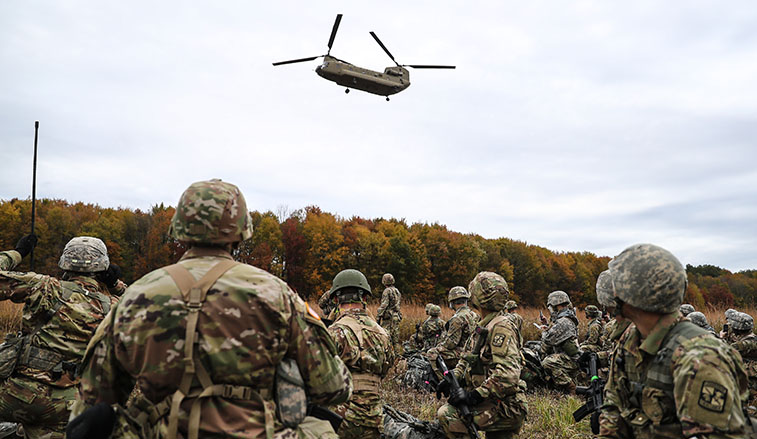 SLIPPERY ROCK, Pa. -The President's Commission for Veteran and Military Affairs at Slippery Rock University, which was created last spring, expects to soon have many across campus standing at attention.

"There's a lot to do because we are just starting," said Catherine Massey, professor of psychology and co-chair of the commission. "But it's going well. We have a very active commission and we already set up some subcommittees to establish bylaws for the commission and looked into some policies that affect our veterans and military students."

The group, comprised of students, faculty, staff and administrators at SRU, was formed to advance the interests of student veterans and military members and their families, similar to how the six other existing president's commissions advocate for groups within SRU's diverse campus community.

There are about 20 self-nominated members of the PCVMA who meet each month. Massey is the perfect leader to help the commission get up and running, having served as the founding co-chair of what is now the President's Commission for Gender Identity & Expression and Sexual Orientation. She also previously served on committees at SRU that supported veterans and military and is a veteran herself. Massey served six years in the U.S. Air Force, retiring as an E-4 sergeant.

"This population of students serving our country have issues that no one else can really relate to," Massey said. "Being a military member myself, I know that when I left the service it was a difficult adjustment because I was used to military life. There are a lot of regulations and rules and when you leave the military and start college, sometimes the resources you need for getting financial aid or other things like counseling are different. The needs of veterans and military members are different so we want to make sure we have effective resources and support available to them."

There are more than 100 students at SRU who identify as veterans and an additional 300-350 military-affiliated students who are either reservists, activity duty military, contracted ROTC cadets or dependents in military families. SRU's support for veterans and military members is well-documented, including recognition as a Military Friendly School. And, it is the recipient of the Secretary of Defense Employer Support Freedom Award, which is the highest U.S. government honor to employers for support of National Guard and Reserve employees.

However, there is still work to be done by the PCVMA. Policies and initiatives that the commission is planning to advocate for include, but are not limited to:

• The adoption of a classroom attendance policy affecting students called for active duty and other military obligations.
• The relocation of the University's Medal of Honor Room. The current tribute to Navy Lt. Cmdr. Michael Estocin, the only SRU graduate to receive the Congressional Medal of Honor, is currently located in the North Hall Welcome Center and the PCVMA is interested in having it located in an area of campus that is more visible.
• The return of "Green Zone" training. Modeled on the "Safe Zone" training, Green Zone training is designed for faculty and staff to receive training about issues potentially facing active service members, student veterans and their families.

While the PCVMA is focusing primarily on advocacy and policy, the commission will also sponsor select programming. With consultation from the History Department, the PCVMA and the Psychology Department are co-sponsoring "The War to End All Wars," 7:30 p.m., Nov. 13 in Spotts World Culture Building, Room 111. A video commemorating World War I will be shown, followed by a discussion led by Massey and Jennifer McGraw, professor of psychology, on the mental health consequences of war and how post-traumatic stress disorder was diagnosed and treated before and after WWI.

SRU programming related to veterans and the military will be announced prior to events taking place Nov. 5-12. They include the University's Military Appreciation Week and the annual Veterans Day ceremony and breakfast, which are organized through other groups, including Alumni Engagement, the Veterans Center and the Office for Inclusive Excellence.