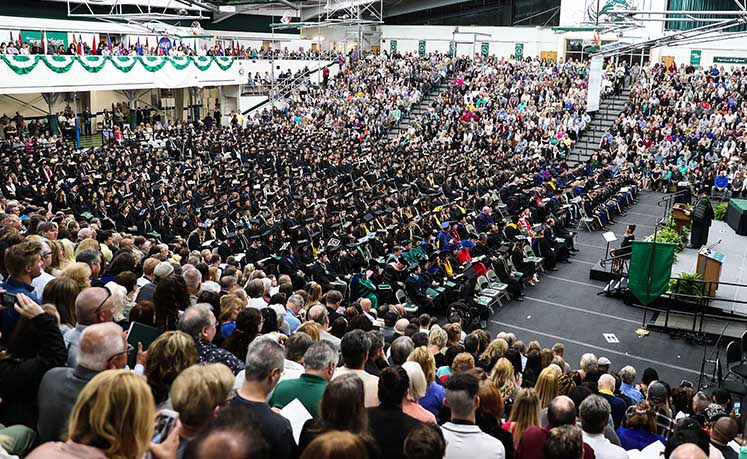 A total of 580 degrees will be awarded at Slippery Rock University’s December commencement ceremony, Dec. 11, at Morrow Field House.

SLIPPERY ROCK, Pa. — Each of the nearly 600 Slippery Rock University students who will participate in the University's December commencement ceremony, 11 a.m., Dec. 11, at Morrow Field House, brings their own story and reasons for walking across the stage and officially accepting their degree. But it's more than garnering a credential to access employment. All have a desire to grow their knowledge, and three of the candidates for degrees are perfect examples, despite not being "traditional" college students.

The University will officially award 405 undergraduate degrees, 153 master's degrees and 22 doctoral degrees, although not all will attend the ceremony. Among those participating will be Joe and Lisa Jablonski, a married couple from Waterford, who each will receive their Doctor of Education in special education, and John Cater, 62, an Ellwood City native, who will receive a Bachelor of Science in interdisciplinary programs with a concentration in philanthropy and nonprofit management.

The Jablonskis, who already have a combined three master's degrees and three post-master's certifications between them, both work in public education. Joe is principal at Grandview Elementary in the Millcreek Township School District in Erie, and Lisa is a learning support teacher in the neighboring Fairview School District. 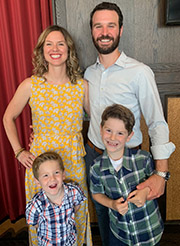 "We wanted to (earn our doctoral degrees) together," Joe Jablonski said. "When I got into administration, I quickly realized that special education was a domain that I needed to learn more about, and my wife is the (family's) resident expert on special education, and it's a field that she's very passionate about."

"As far as getting anything extra toward certifications, this degree only opens the door more to maybe becoming a college professor," Lisa Jablonski said. "When I was enrolling in the program, and my mother asked me what I was going to get out of that, I said 'knowledge.' It's the knowledge base that really puts us ahead of where we were."

Timing was seemingly not ideal. When the Jablonskis enrolled, their sons, Karson and Levi, were 4 and 1 years old, but in hindsight it was worth the demands on their schedules as working parents to become doctors, especially when their sons, now 7 and 4 years old, will get to see their parents wearing the caps and gowns.

"It's going to be very emotional and we're proud to do this together as a family," Lisa Jablonski said. "Going through this program as our sons have grown and we've grown together in our marriage, it means a lot (to reflect) on what we were able to accomplish and do together."

Cater went through a different kind of transition to earn his degree. He was a plant manager for a manufacturing company in Mercer where he worked for 25 years before it closed. Because the company moved operations overseas, there was a trade agreement and the U.S. Department of Labor funded employees' education through a retraining initiative.

Cater, who earned an associate's degree in metallurgy from Penn State University in 1981, took the opportunity to earn his bachelor's degree at SRU through an online degree completion program in philanthropy and nonprofit management.

"I went into it with the perspective of 'I want to learn,'" said Cater, who has an 18-year-old son, Christian, who is now conducting a college search. "I wasn't thinking about how I'm going to make a living with this for the rest of my life or stressing out about grades. I just wanted to learn everything I can learn, and that made the experience much more satisfying. I feel like I am really well prepared to go out into this nonprofit world now and make a difference in society from skills that I learned (at SRU)." 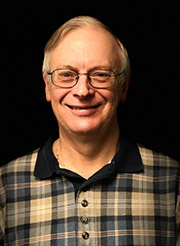 Cater said he had two main reasons for walking in the commencement ceremony.

"One is just to celebrate this achievement; this is something that's not done every day," Cater said. "The other one may sound weird, but I want to show younger students that you're not done learning. It doesn't matter how old you are. There's always something new to learn. If they see somebody older there, they might think maybe I can do this again sometime."

The Jablonskis can attest. They didn't walk in any of their previous commencement ceremonies for their three multiple master's degrees at other institutions.

"When it came time to decide, we both looked at each other with a resounding, 'Oh, yeah, we're walking!" Joe Jablonski said.

The speakers for the Dec. 11 ceremony will include SRU President William Behre providing opening remarks and the conferring of degrees, Matt Lautman greeting graduates on behalf of the SRU council of trustees, and Don Huddart, a 1987 SRU graduate and past president of the SRU Alumni Association, welcoming the graduates as new SRU alumni on behalf of the association.

The commencement address will be delivered by Chad Miller, a 2002 SRU graduate, who recently became the founder of the Louisville Slugger Hitting Science Center.

Tickets are required for entry to the ceremony. The ceremony will be live streamed at www.sru.edu.