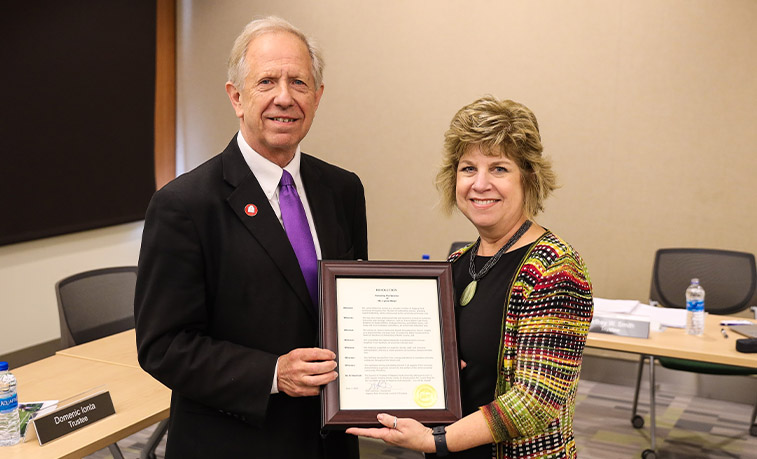 The council presented a commendation honoring Jerry Bejbl, '63, who passed away March 20. Bejbl was the first SRU graduate to donate more than $1 million in lifetime giving to the University. A member of the Rock Athletics Hall of Fame, Bejbl starred on the SRU football teams that won conference championships in 1961 and 1962. Bejbl and his family endowed scholarships and contributed to the athletics facilities at SRU, including the Jerry Bejbl Weight Training Center at Mihalik-Thompson Stadium.

The council also presented a commendation honoring the service of Lynne Motyl, chief human resources officer, who will retire June 24 after serving the University for 36 years. Motyl contributed to various initiatives and chaired or served on several committees during her time at SRU. She also served the community as a past chair of Leadership Butler County and board of directors of the United Way of Butler County.

"We appreciate Jerry's generosity to his alma mater as we know that his true legacy lives on through the profound impact he has made on the University," said Matthew Lautman, chair of the trustees. "We also express our thanks to Lynne for her incredible service to SRU, and for exemplifying the highest standards of professionalism in her support of our students, faculty, staff and administration."

Other actions taken by the council included a resolution to approve the renaming of SRU's softball field, Kasnevich Field, in honor of Jan Kasnevich, '68, who led The Rock softball team to three national tournament berths during her 10 years as coach from 1977-86. Kasnevich was also a successful field hockey coach at SRU for 13 seasons (1985-88, 90-97). As a student-athlete at SRU, she played basketball, volleyball, tennis and field hockey, before going on to play on the U.S. National Field Hockey Team.

Other actions taken by the council were the electing of officers for 2022-23. SRU trustees Domenic Ionta (chair), Joshua Young (vice chair) and Brooklyn Graham (secretary) were elected to one-year terms. Graham, a junior political science major from Kittanning, recently joined the council as a student trustee. Additionally, the council re-appointed Lia Paradis, professor of history, to the role of faculty liaison to the COT for 2022-23. Paradis was first appointed to this role as a non-voting liaison to the council in 2020-21.

The trustees also passed two resolutions that were added to the meeting agenda based on actions by the Governance committee from its meeting earlier in the day. The first resolution requests that the Board of Governors of Pennsylvania's State System of Higher Education direct the Office of the Chancellor to provide the scope and results of a financial investigative report into SRU's finances to the SRU trustees. The second resolution, a request directed at the Pennsylvania legislative delegation from Butler County, seeks to have the nomination and appointment of trustees at all State System institutions continue to be conducted by the governor with the advice and consent of the Senate.

More information about the meeting, including materials that were presented to the council, are available on the SRU website.

The next quarterly business meeting is scheduled from Sept. 22-23 at the Smith Student Center.